One of the biggest jokes while I was pregnant was how the baby was taking up so much of my brain power that I couldn't even do simple math.  Which is amusing since I'm such a math geek.  Once he was born the first thing my brother asked was some simple math problems to see if I could do them and I passed with flying colors. I decided to make lactation cookies and hunted around for all of the crazy ingredients for them.  The first ingredient is butter so I warmed up a pound of butter.  After not having the time to do it for many, many days, I decided I was going to make them yesterday.  I creamed the butter with the sugar just like the recipe said and it seemed a little... wet.  I added the eggs and vanilla and it was looking more like cake batter than cookie batter.


After reading the recipe again I realized that it called for a cup of butter, not a pound.  The only way to recover at this point was to double everything.  I added double the amount of everything that was already in the mixer and kept going.  By the time I added the flour the batter was almost overflowing.  It's a big batch of cookies.  I add the oatmeal and chocolate chips then start baking. 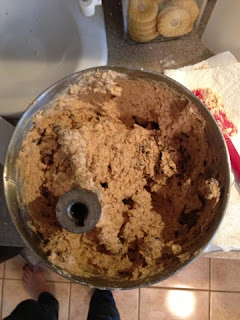 The first batch out of the oven seemed undercooked and HUGE.  They really flattened out in the oven and were now about 4" in diameter.  It was about the time that I had the 2nd tray in the oven and the rest of the batter in a bowl to go in the fridge that I realized I had forgotten to double the oatmeal.  THAT's why they were so thin.

I had already washed my mixing bowl and didn't really want to get back into it, the little one was starting to get cranky and wanted attention, so I just left it.  I'll have to divide it in half to add the oatmeal in parts because there's no way my mixer can hold 3 more cups of oatmeal mixed in.

This is what happens when mommy brain takes over and prevents you from being able to do simple math.  It probably didn't help matters that I was also cooking lunch at the same time so I was pretty distracted.

In other news, they're really yummy cookies.  I don't think I'll have a problem making myself eat these.