Boob or bottle? The battle. 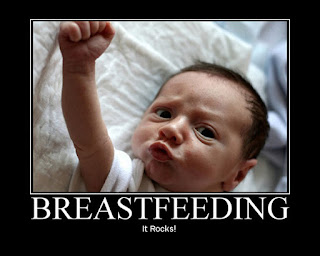 It seems that one of the biggest battles in new mommy circles is breastfeeding vs formula feeding.  There is such contention that makes it seem like you're a failure as a mom if you can't or choose not to breastfeed.  This is a war I just don't understand.

5 months ago I was on the exclusively breastfeed bandwagon.  All the studies say that's what's best for my baby and why wouldn't I give him that?  Couple that with the fact that I just hate formula and the choice was simple.  Why do I hate formula so much?  It's not that I'm superior to anyone else who chooses formula, it's for far more petty reasons.


Most of the babies I've been around in my life were breastfed.  The few that I've known who were formula fed were just a little... icky.  They'd always smell like forumla, I guess from spitup, they were kind of sticky, and all around just ...icky.  I hate judging babies based on things they can't help.  They can't help what they're fed, that they spitup, or that they're not cleaned up/changed frequently enough to not have that odor.  But try as I might, I still hold a little prejudice.  I am certainly not saying that all babies that are formula fed are in this category, probably more aren't than are, like I said, it was my personal, petty prejudice.

Then I had O.  In the hospital we nursed, I couldn't tell what he was getting but everyone told me that he'd get enough.  Then when we left he had lost 13% of his body weight which is terrifying when you're under 6 pounds to start.  His pediatrician said that we needed to supplement with formula to get his weight up and went in for regular weight checks.  We found those first days absolutely terrible, he didn't know how to swallow so he wasn't getting anything to eat.  Slowly, he started gaining weight and my milk finally came in so we tried nursing again in addition to the formula.  He wanted nothing to do with it, he wouldn't latch on and would just scream.  I chose then to do what's best for my baby: give him a bottle. 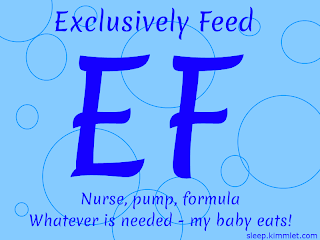 I bought myself a fancy, and expensive, pump and pumped for him around the clock.  If he wouldn't take it from the tap he was going to have my milk one way or another.  My supply has never been great and we've had to supplement the whole time.  Some days he only gets milk, others he gets a bottle of formula.  Did I fail my son because he's not "exclusively breastfed"? No. Are the other mommies who do better than me? No.  I made a very important decision in those early days of O's life, to feed him.  Whatever it takes, whatever it is, I will feed him what he needs to grow and thrive and I will not feel bad about it.

I do, however, make sure that if he does spit up that he's cleaned up, well, and that he always smells baby fresh.  We've never really had a problem with that, I don't know why those babies in my past did. He always smells good and he's so cute and happy because he's healthy and doing well.  I don't understand the contention between breastfeeding moms and formula moms because in the end isn't our goal the same? A strong, healthy baby.

I exclusively feed my baby, whatever it takes to help him grow and I do the best that I can with what I can control.
Posted by Kimberelly